Since the pandemic I’ve been seeing a therapist. I’m not completely sure how these things connect, but, something about the extra uncertainty of the future, mixed in with the extra delving into my past, has got me listening to a lot of music I grew up with, like The Go-Go’s, and Cyndi Lauper. I just submitted a grant application and titled the proposed exhibition True Colors. I’ve now decided to do a whole series of new works based around the titles of the songs:

Girls Just Want To Have Fun

I Drove All Night

All Through The Night

I thought Cyndi Lauper was like a prime example of eighties cheesy pop, but now that I listen again, I don’t think there’s anything cheesy about her music at all. Some of the lyrics are quite beautiful actually.

I’ve been uncertain about my work lately, and am having a hard time figuring out what I want, and why I’m making the things I’m making. The pandemic is still a driving concern. I live alone in a live-work space, so essentially I’m living in my studio. I’m unemployed until further notice, and both the exhibition and residency I was supposed to have are also postponed until further notice.

However, that is proving way more difficult than it might seem.

I already wrote about all the stripes I’ve been drawing to curb my anxiety, but I want to take it even further. I’ve been disgruntled about certain shows I didn’t get into, and have been spending way too much time on social media comparing myself to every single artist out there. I want to be able to focus on making work that pleases me, without so much concern for fitting into someone else’s theme or category. Who am I making the work for after all?

I feel stuck in the middle of, not deep enough and not superficial enough. I’m neither overtly controversial nor overtly commercial. Why does that feel like a problem? I used to think that not being easily defined was a good thing in art. 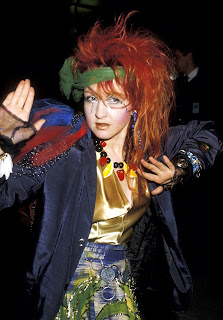 Anyway, back to Cyndi Lauper. True Colors seems the most appropriate title for an artist trying to be true to herself. And that’s all I can possibly do at the moment.

How to stress over grant applications

So far my grant application is looking like this.

Today I watched NYFA's live seminar to get more info. You could comment online and they would read the comments out loud and answer the questions. Just as she started to answer my question the live feed got disconnected; which I thought was a little ironic. They came back on in a short bit to answer me fully which was great, but just as I was jotting down the answer, probably on the last sentence she was saying, my computer died..... More irony.

It's been a crazy week and it can best be summarized by outrageous technical difficulties and customer service from hell. I will not weary you with the details.

Typing this on my husband's laptop isn't the worst thing in the world, and when January is over, this application will be submitted, along with another one due on the 28th, I will have finished and photographed four new paintings, dropped off work for an upcoming show, the Roaring Twenties Fundraiser I'm hosting will be over, and the early setting up stages for my job as Director of Beacon Open Studios will be fully in place. That is one long sentence. Wish me luck!