Who we are has so much to do with where we are from.

Something's been on my mind about place and belonging. So many artists talk about where they're from and how much it's influenced their work and their lives. Whether they left a place by choice or not, whether they stayed, returned, or were never able to, whether they hated it or loved it, it has played an important role.


I was born and raised in Staten Island, New York, and lived there until I was 29. 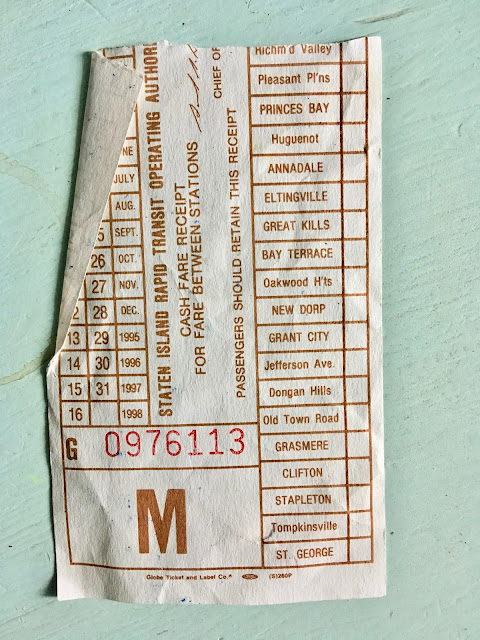 Staten Island has a very ghetto mentality. By that I am being quite inclusive as far as race and discrimination. It's less about poverty, but definitely about fear, isolation, and cultural starvation.

Staten Island is divided by neighborhoods. There are 19 stops on the Staten Island Rapid Transit. Each one has its own personality. In my era, neighborhoods were divided into territorial gangs. My neighborhood gang was called the Albee boys because we lived on the cross street of Albee Avenue. The Albee boys were rivals of the New Springville boys. In 1991 Thomas Bickerton's big brother was beaten to death with a baseball bat by the New Springville boys and his name was spray painted under the overpass a block from my house. I remember this distinctly because Thomas Bickerton had jumped up to kiss me in the courtyard of PS 36 during our Kindergarten recess, and I had been friendly with him ever since. I graduated from a high school with a population of almost 4,000. There were exactly two African American students in my graduating class. In the last election almost 75% of the people from my old neighborhood voted Republican.

Staten Island is divided by the north shore and the south shore. My neighborhood on the south shore was made up mostly of people who had moved from Brooklyn to Staten Island, including my family. People who commuted to Manhattan to work every day but didn't spend much time there after working hours. My friends and I didn't hang out in the city, we hung out on the corner, in back of the high school parking lot, or literally at the giant rock in the woods by my house.

In 1986 I was accepted into NYC's High School of Performing Arts for ballet. I didn't go. I have no recollection of what that conversation was like, but for a sheltered 13 year old from Staten Island, the idea of riding the ferry to the subway by myself to Fiorello La Guardia every day wasn't even in my peripheral.

There are five boroughs of New York City: Manhattan, Bronx, Queens, Brooklyn, Staten Island. Staten Island is the only borough that doesn't physically connect to Manhattan. There is no bridge or train that goes directly to the city. Commuters take a train to a ferry, or a bridge to a tunnel, or some combination which often includes driving from New York to New Jersey to New York again. From Annadale it took me an hour and a half to get to midtown Manhattan. A half hour train ride, a 20 minute ferry ride, a ten minute subway, plus the walk to, and the wait for, each of these operations. There are three bridges that cross over to New Jersey and exactly one bridge that crosses to Brooklyn. This is not an accident. It symbolizes a great cultural divide. In 1993 65% of Staten Islanders voted to secede from NYC. With mostly no interest in taking advantage of/enjoying any of New York City's culture, art, spirit, energy, there was also no interest in paying its expenses/tax bill.

Staten Island, often referred to as the "forgotten borough", if you didn't already know, was also once home to the largest garbage dump in the world. T h e   w o r l d.  It was seen from outer space... for real. On a particularly stale day one could smell the dump from miles away.

It took me years to accept that the place I grew up in was, well, kind of embarrassing. A way more suburban than urban, left out, dumped on borough under a giant shadow of one of the greatest cities in the world. When I worked in the city I never volunteered that I was from Staten Island. People would make fun of the dump or the ferry or the fact that New Jersey was easier to get to.

I hated Staten Island when I was growing up. I was shy and artistic and I didn't get anyone's inside jokes about the Staten Island mall. I had no connection whatsoever to the place I was from. When I was a senior and about to graduate high school, my parents went to an open school night and incidentally met with my art teacher. Mrs. DiGuiseppe was shocked that I had absolutely no plans for any specific college or to pursue art in any way. She's the reason I became an art major. Not because she was particularly inspiring, but because she was the only one who'd suggested it.

I think I let the place I was from define me for a long time. I'm beginning to understand that the place itself is just part of a story I tell myself about who I am, and that's something I can change.


*Shaolin is what the Wu Tang Clan called Staten Island in the early 1990's.