OF POWER AND TIME 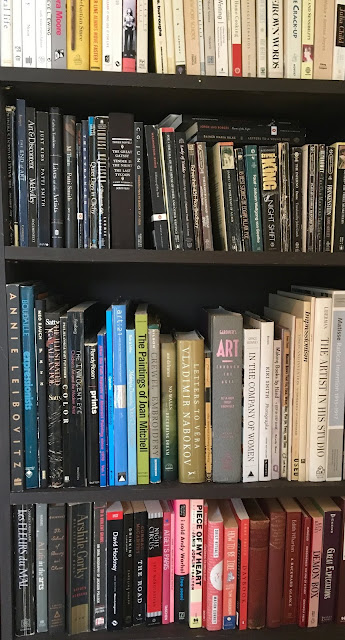 I have been rifling through my bookshelf these days. Now that I have a bookshelf for the first time in years, I can easily see what books I have, and what books I have no use for. Some I can't remember why on earth I own, or if they're even mine, so, one by one I am reading through them all! Thank you to my lovely friend whose comment reminded me I own this gem by Mary Oliver, Blue Pastures. Grateful that I can access these inspiring words at any time. Of Power and Time is so very relevant right now, I couldn't resist copying and pasting (except for a few omissions) the entire piece here. Within the confines of time, it is approximately a 7 minute read. Enjoy! 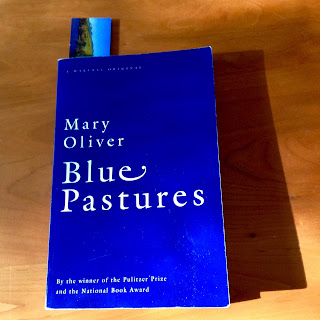 Of Power and Time

It is a silver morning like any other. I am at my desk. Then the phone rings, or someone raps at the door. I am deep in the machinery of my wits. Reluctantly I rise, I answer the phone or I open the door. And the thought which I had in hand, or almost in hand, is gone.
Creative work needs solitude. It needs concentration, without interruptions. It needs the whole sky to fly in and no eye watching until it comes to that certainty which it aspires to, but does not necessarily have at once. Privacy, then. A place apart—to pace, to chew pencils, to scribble and erase and scribble again.
But just as often, if not more often, the interruption comes not from another but from the self itself, or some other self within the self, that whistles and pounds upon the door panels and tosses itself, splashing, into the pond of meditation. And what does it have to say? That you must phone the dentist, that you are out of mustard, that your uncle Stanley's birthday is two weeks hence. You react, of course. Then you return to your work, only to find that the imps of idea have fled back in to the mist.
It is this internal force—this intimate interrupter—whose tracks I would follow. The world sheds, in the energetic way of an open and communal place, its many greetings, as a world should. What quarrel can there be with that? But that the self can interrupt the self—and does—is a darker and more curious matter.

I am, myself, three selves at least. To begin with, there is the child I was. Certainly I am not that child anymore! Yet, distantly, or sometimes not so distantly, I can hear that child's voice—I can feel its hope, or its distress. It has not vanished. Powerful, egotistical, insinuating—its presence rises, in memory, or from the steamy river of dreams. It is not gone, not by a long shot. It is with me in the present hour. It will be with me in the grave.
And there is the attentive, social self. This is the smiler and the doorkeeper. This is the portion that winds the clock, that steers through the dailiness of life, that keeps in mind appointments that must be made, and then met. It is fettered to a thousand notions of obligation. It moves across the hours of the day as though the movement itself were the whole task. Whether it gathers as it goes some branch of wisdom or delight, or nothing at all, is a matter with which it is hardly concerned. What this self hears night and day, what it loves beyond all other songs, is the endless springing forward of the clock, those measures strict and vivacious, and full of certainty.
The clock! That twelve-figured moon skull, that white spider belly! How serenely the hands move with their filigree pointers, and how steadily! Twelve hours, and twelve hours, and begin again! Eat, speak, sleep, cross a street, wash a dish! The clock is still ticking. All its vistas are just so broad—are regular. (Notice that word.) Every day, twelve little bins in which to order disorderly life, and even more disorderly thought…. Another day is passing, a regular and ordinary day. (Notice that word also.)

Say you have bought a ticket on an airplane and you intend to fly from New York to San Francisco. What do you ask of the pilot when you climb aboard and take your seat next to the little window….
Most assuredly you want the pilot to be his regular and ordinary self. You want him to approach and undertake his work with no more than a calm pleasure. You want nothing fancy, nothing new. You ask him to do, routinely, what he knows how to do—fly an airplane. You hope he will not daydream. You hope he will not drift into some interesting meander of thought. You want this flight to be ordinary, not extraordinary. So, too, with the surgeon, and the ambulance driver, and the captain of the ship. Let all of them work, as ordinarily they do, in confident familiarity with whatever the work requires, and no more. Their ordinariness is the surety of the world. Their ordinariness makes the world go round….for the world has a need of dreamers as well as shoemakers….
And this is also true. In creative work—creative work of all kinds—those who are the world’s working artists are not trying to help the world go around, but forward. Which is something altogether different from the ordinary. Such work does not refute the ordinary. It is, simply, something else. Its labor requires a different outlook—a different set of priorities. Certainly there is within each of us a self that is neither a child,  nor a servant of the hours. It is a third self, occasional in some of us, tyrant in others. This self is out of love with the ordinary; it is out of love with time. It has a hunger for eternity.
Intellectual work sometimes, spiritual work certainly, artistic work always—these forces that fall within its grasp, forces that must travel beyond the realm of the hour and the restraint of the habit. Nor can the actual work be well separated from the entire life. Like the knights of the middle ages, there is little the creatively inclined person can do but to prepare himself, body and spirit, for the labor to come—for his adventures are all unknown. In truth, the work itself is the adventure. And no artist could go about this work, or would want to, with less than extraordinary energy and concentration. The extraordinary is what art is about.
Neither is it possible to control, or regulate, the machinery of creativity. One must work with the creative powers—for not to work with is to work against; in art as in spiritual life there is no neutral place. Especially at the beginning, there is a need of discipline as well as solitude and concentration….
No one yet has made a list of places where the extraordinary may happen and where it may not. Still, there are indications….It likes the concentrating mind. It likes solitude. It is more likely to stick to the risk-taker than the ticket-taker. It isn’t that it would disparage comforts, or the set routines of the world, but that its concern is directed to another place. Its concern is the edge, and the making of a form out of the formlessness that is beyond the edge.
Of this there can be no question—creative work requires a loyalty as complete as the loyalty of water to the force of gravity. A person trudging through the wilderness of creation who does not know this—who does not swallow this—is lost. He who does not crave that roofless place eternity should stay at home. Such a person is perfectly worthy, and useful, and even beautiful, but is not an artist. Such a person had better live with timely ambitions and finished work formed for the sparkle of the moment only. Such a person had better go off and fly an airplane.
There is a notion that creative people are absent-minded, reckless, heedless of social customs and obligations. It is, hopefully, true. For they are in another world altogether. It is a world where the third self is governor. Neither is the purity of art the innocence of childhood, if there is such a thing. One’s life as a child, with all its emotional rages and ranges, is but grass for the winged horse—it must be chewed well in those savage teeth….The working, concentrating artist is an adult who refuses interruption from himself, who remains absorbed and energized in and by the work—who is thus responsible to the work.

On any morning or afternoon, serious interruptions to work, therefore, are never the inopportune, cheerful, even loving interruptions which come to us from another. Serious interruptions come from the watchful eye we cast upon ourselves. There is the blow that knocks the arrow from it mark! There is the drag we throw over our own intentions. There is the interruption to be feared!
It is six A.M., and I am working. I am absent-minded, reckless, heedless of social obligations, etc. It is as it must be. The tire goes flat, the tooth falls out, there will be a hundred meals without mustard. The poem gets written. I have wrestled with the angel and I am stained with light and I have no shame. Neither do I have guilt. My responsibility is not to the ordinary, or the timely. It does not include mustard, or teeth. It does not extend to the lost button, or the beans in the pot. My loyalty is to the inner vision, whenever and howsoever it may arrive. If I have a meeting with you at three o’clock, rejoice if I am late. Rejoice even more if I do not arrive at all.
There is no other way work of artistic worth can be done. And the occasional success, to the striver, is worth everything. The most regretful people on earth are those who felt the call to creative work, who felt their own creative power restive and uprising, and gave to it neither power nor time.