Every year my unwritten new year's resolution includes seeing more art and making more art. This year is no exception. Last week when I saw the announcement for the opening reception at the Locks Gallery in Philadelphia I marked it on the calendar. Leave work early for a road trip to Philly with the family. Great plan.

Driving through the Pinelands' empty two lane highway, the sunset gleaming, my husband's homemade "Road trippin" CD playing, we were on our way. My husband was feeling especially smug since he had worked all week in Pennsylvania and thought he had figured out the better way to get to Philly from Manahawkin.
The beautiful sky, horse corrals and empty fields were fitting seamlessly into the lyrics of songs like Phish's Tires on your car, Cat Steven's On the Road to find out, and Neil Young's Long May you run. By the time Road Trippin' by The Red Hot Chili Peppers came on we were basking in road trip exuberance. Little did we know the foreshadowing accuracy of the lyrics "let's go get lost, let's go get lost".

Apparently there's a reason why the roads were so empty. It turns out my husband does indeed know how to avoid Camden traffic at 5pm on a Friday. Two and a half hours later, much worse for wear, with 15 minutes left to the opening, the GPS slurring his words, we arrived at Washington Square.
There's nothing like the comforting welcome of little plastic cups of white wine and heated beautiful art galleries. We were so relieved to get out of the car and make it to the show we soaked up every single fiber of canvas and layer of paint and pigment. 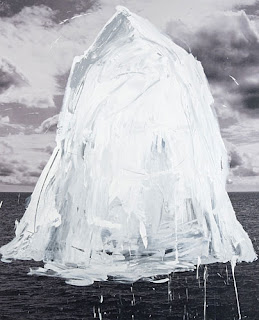 The show was lovely. Not in an overwhelmingly gorgeous way, but neat and succinct. A sensible mix of artists. Besides the obvious black and white nature theme there were a few lush and tactile gems such as the handmade paper and stenciled pigment piece by Leonardo Drew, and the juicy acrylic iceberg carelessly painted over a static xeroxed seascape by Marcus Harvey. The other stand out and my daughter's favorite was a fabulously worked over woodcut by Orit Hofshi.

On our walk to get something to eat we stopped at another opening at the Bridgette Mayer Gallery on Walnut street. A much livelier crowd but with less seasoned art. We enjoyed the installation of hundreds of little wooden spools with red wool but wished the other pieces in the show were as obsessive and striking. 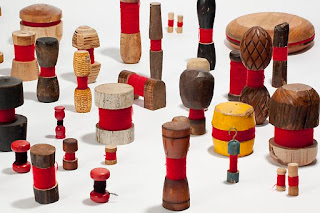 As we sat at Moriarty's with our cheeseburgers and onion rings we laughed about  how the evening would look a lot better in my blog and how I was glad in the end that we didn't turn the car around and go home hungry and miserable.

Is there a moral to this story?
Firstly, I have to say to all our New Jersey friends who are so in love with Philadelphia but have yet to take us on a guided tour, you're 9 years too late. In the three efforts we've made since living here we have yet to experience what everyone is so in love with. The moral of the story, alas, is not try, try again. It's definitely not third time's a charm either. More like three strikes you're out. The moral of this story is stick with what you know. Put us on a bus, subway or taxi anywhere in New York and we're good to go…